There is a lot of embroidery types. Many nationalities have their own features of its execution, which set the nature of the flow of art. Brazilian embroidery has their differences

Each needlewoman with pleasure meets with various technicians and trends of this type of art like embroidery. Interesting various ideas and beginners who only recently turned their attention on her needlework. Whatever it was, indifferent Brazilian embroidery will not leave anyone.

It has a lot of features that distinguish it from other areas of this type of art. Some initially it may seem that to fulfill the masterpiece in this style is almost impossible, without having skills. But there is nothing impossible, and if you familiarize yourself with the basic recommendations for the implementation, you will definitely get to create a canvas.

Master’s imagination This technique is striking the beauty of the work.

Features of this style:

To perform work it is necessary to use needles whose length is at least 5 cm.

Many fans of the technique, according to which Brazilian embroidery is performed, they say that it is almost impossible to find threads used in the homeland of this style. But you can use threads with a similar composition. Some needlewomen use thin yarn or thick threads for sewing.

Instead, tapes are often used, which is another feature of Brazilian embroidery.

Check out some ideas for your future works in this style.

This flower is often «Main hero» work. Learning how, according to the Brazilian embroidery technique, recreate a rose, you can reproduce floral motifs in the composition.

To work, you will need:

The central part and flower petals are performed with seams.

Thread remove on the front side of the canvas, make a stitch called «Back needle», T. E. We will spend the needle right to left almost at the same point where the thread was bred, and leave it in such a position.

We throw the thread to the index finger of the left hand (on the back side). Now finger bend, stretch the thread and pay her finger. Around the fingers make a loop, bringing it at the beginning under the thread, which is now in work, and then under the one that comes out of the fabric.

Now again with a thread, I will bring a loop with a finger to the tip of the needle, then throw a loop on it, tighten it and move closer to the ledge outlet point.

In the same way, we gain the rest of the loops, all of them should be 11.

Loops hold the hand and gently produce thread through them through needle. To secure the seam, need a needle through the wrong way, bringing it exactly to the outlet of the thread.

Next, tighten the last, fix it. Do it carefully so that the canvas not tightened. Rose Center Ready. 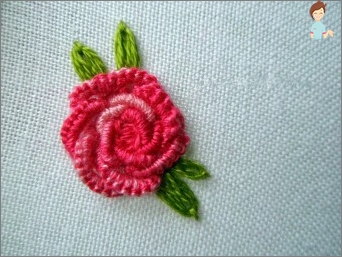 We continue Brazilian embroidery, making volumetric petals of the first circle. For them you need to take a thread, the tone of which is lighter than for the central part of the flower.

Thread output by needle on the front side of the canvas under the center of the rose. As in the case of the center, we leave the needle in the canvas.

We recruit 11 loops on the same algorithm, as well as for the middle of the rose. Seam must be fixed too by analogy with fixing a seam for a flower.

Next, we make 2 more petals in the same way, each time removing the thread of the canvas. They should be placed not near, but with overlaying on each other.

Now it remains only to decorate the flower with leaves. Thread need to withdraw under the petals of the extreme circle. Total leaves will make 4 – 2 on each side, located opposite each other.

We will perform them by analogy with the center, but the sheet must be from 14 loops. Thread output points for two adjacent leaves should be no further than a few mm from each other.

It is necessary to perform it with another seam. According to this scheme of the Brazilian embroidery, it is made by two-sided type stitch. 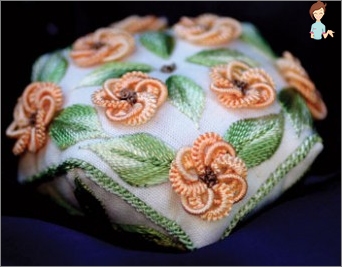 The needle is inhabited by twice, we take it on the front side at one point, and back – at another point. The needle tip should be between two parts of the thread. Leave it in the canvas. Right hand perform a loop and take it to the right of the needle. Left hand Make another loop, and on the left side of the needle, make a knot.

Now repeat the same actions only mirror. Alternate these manipulations, due to what the right and left loops are turned out alternately.

Having gained their quantity, secure the seam, removing the needle on the opposite side of the web.

With this scheme you can make echinacea petals, its leaves, stem.

If you just learn this type of creative work, try to perform a rose, only now from another material. For embroidery we will use ribbons.

The edge of the ribbon is cut off diagonally, invated in a needle, measure 40 cm from the meak and cut off. Tighten a little ear, and the tip of the needle has been done in the tape, retreating from the edge of about 1 cm.

Now tension tighten to formed a tightened loop, thanks to which the material for the future rose is well fixed in the ear.

Next, performing embroidery with ribbons, the last one from the opposite eye needle needles bending a 1 cm from the edge. Near the folding place, we make a puncture, stretch the tape with a needle, thus fixing the edge.

Now this segment is set aside for a while and take another segment, from which we will form a rose.

One of his edge bend so that it is at right angles in relation to the rest of the segment. The latter turn around this piece, a small tubule should form, the bottom of which must be picked up by conventional threads by needle. 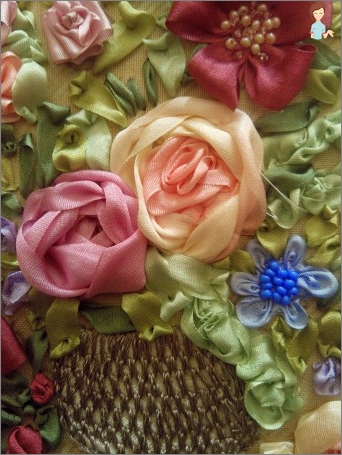 I flex a large part of the segment, wrap it in such a way that her top is headed by a book, and then we add it at right angles and perform a turn around the tube. Now the element of embroidery with ribbons, following the example of Brazilian craftsons, grab the usual thread.

By the same principle, we carry out the desired number of turns until it turns out a beautiful flower core.

Its conventional threads are sewn to linen fabric (to the base), which is already hoping for the chambers.

Now we take the needle with a ribbon and we take it near the core, and after a few mm we take on the opposite side of the canvase. Must form a hinge height corresponding to the height of the core. This loop is petal. Thus make the rest of the petals around the rose. There must be several rows to be a beautiful flower.

Leaves roses should also be done from the ribbons, performing a needle loop, as for petals, but withdrawing a needle in the opposite direction, retreat a little more.

Many craftsmen can be found work in which roses are decorated with rhinestones, stones, beads, which does not contradict the brazilian embroidery technique. Knowing the basic principles of work, you can independently create interesting and complex compositions.