Grain Doll or Motanka – Ancient Chargeg for Legends Brought to the House Luck, Abundance and Welfare. Make such a mascot, and it will be the original interior decoration

Doll Grain – this is a symbol of wealth and well-being reigning in the family. Moreover, it will be fat and replete, the better lives in the inhabitants of the house. This charm is made in the fall, when there is a harvesting harvest, because it is customary to use «Stuffing», collected from his garden. The base of the pupa is a linen bag, packed, and the whole it must be dressed in national clothes with patterns, symbolizing the sun and water.

Grain or Motanka was considered an ideal offer to such festivities like Christmas and harvest day. Since its inception, the exercise was carefully kept in a red corner, next to icons. 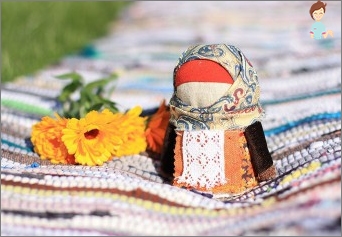 It was believed that thus grain is gaining a new force, and the upcoming harvest will be the best former. The sowing year began to be seeded in the field of grain, which so much time was shut down by Motanka. After the new harvest was assembled, the brunt, as elsewhere called the grain, was filled with wheat, buckwheat, peas, or oats, just collected from the fields.

The history of the self-made grain doll says that the cereals stored by it are charged with huge vital energy and power that can be transmitted to man.

In addition, women material like a similar craft for pregnant in the coming year.

Making the brunt on their own, it is recommended to simultaneously ask her about help in certain affairs and endeavors, showing the burning desire to change its life and the style of the entire family for the better.

What cereals can be used?

Whether the brunt (grain) can be filling literally by any cereals and mixtures of them. It is unacceptable to use crushed or defective grains, flakes and other products that have passed industrial processing.

Most often, a similar chart keeps the following components inside:

How to make a charm for your family?

In order for you in the house there is a full-fledged and pretty doll grain, try to make it with your own hands, especially since there is nothing complicated.

Another, simpler version of how to make a pretty cereal doll with your own hands looks like this:

Remember that one-sided, thin or born brunt will not bring your home anything good. Moreover, she will symbolize poverty, laziness and hunger. Never paint the Motanka face, do not embroider with it with threads and do not stick to it special toy eyes.

Grainshushka is not only a symbol of wealth and well-being. This is a great addition to the interior of the kitchen and dining room, especially, and if it is a couple of rich, then the bedrooms.

Try to spend half an hour of time on a similar craft, and check how true ancient legends.