Wedding customs – fertile material for a couple who wants to make memories of this period unforgettable. National rites will truly decorate the wedding ceremony

National wedding customs have been unusually popular. An increasing number of couples in love prefers to make marriage in accordance with the traditions of the Russian people. Therefore, it is interesting to carefully consider the features of a truly Russian wedding.

In Russia, the wedding always took place with a special scale. Not only the ceremony itself was of great importance, but also preparatory stages. But, having worked on the glory, the people from the nearest area took part in the walk.

All preliminary stages had a fairly strict scenario and included:

Each tradition attached a special meaning. So, for example, the matchmaker made it possible to find out whether or not the marriage union between representatives of two families is possible. Credit was needed to clarify the conditions for the wedding, and also determined the size of the dowry.

The bachelorette party and the boy symbolized the farewell of young with a free life, and allowed the last time to enjoy communication with friends. Wedding legalized the relationship between young. The wedding night served as a reinforcement of a sighted union. Wedding Pier gave the opportunity to celebrate a joyful event.

By the way, the violation of the sequence of traditional stages could be the basis for recognizing the insolvency of the marriage union.

Along with the obligatory stages, there were rites, which, if desired, could be neglected. For example, if a young couple is beautifully familiar and families live in the same area, it was not necessary to spend on or, on the contrary, seeing, conspiracy and matchmakers united. And if the bride lived in another village, the views became an important stage, which depended on the decision to marry. 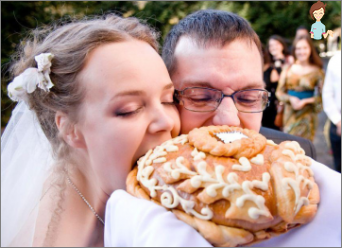 Although there existed a general scheme, the wedding traditional customs of the Russian people differed depending on the terrain.

So, in Siberia and the northern regions before the wedding, the girl was supposed to visit the bath, saying goodbye to the virgin, in the Pskov province of the bride and her girlfriends, they met on the way to the church of the groom and put paper flowers to his feet, in the southern regions of the young always after the wedding welcomed with carabically.

Naturally, the main active persons of the rites advocated the groom, demonstrating respect for the relatives of the future wife, and the bride, who personified the submission of the parents of the groom and the named after.

But even besides the main persons, a huge number of people took part in the presentation: the parents of a young couple, close and distant relatives, friends and girlfriends, matchmakers, calender, managers of wedding celebrations.

Unfortunately, currently not all of the classic characters are used in the holiday. For example, they have long lost their special importance of calender, young, successfully married women with children, whose duty was the preparation of wedding cavalry. 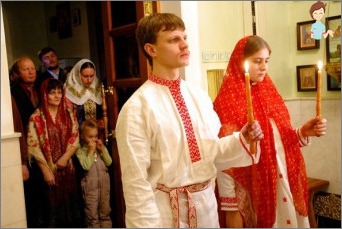 No less important considered outfits. During the celebration, the bride changed the clothes several times, thereby showing the status change. So, before the wedding relied on mourning «Playing» Outfit, at the wedding ceremony – a bright multicolored or white dress, and after the marriage night, the module put on a mandatory headdress.

The groom was fastened to the header, a square handkerchief with an embroidery, or a small bouquet, and on the shoulders picked up a towel, which, however, could be used and instead of a belt.

How did the wedding traditions in Russia

At the heart of celebrations were the rethinking ancient Slavic traditions, over time, closely woven with Orthodox rituals.

Some pagan rites are most recently incredibly popular:

It’s funny that such rites were accompanied by prayers addressed to the Mother of God, holy aspirations, Jesus.

Modern traditions originated in the interval, starting from 19 and ending with the first quarter of the 20th century. However, it is worth noting that already in written sources of the 14th century there are descriptions of weddings using characteristic expressions: «bride», «wedding», «groom», «Shatny». 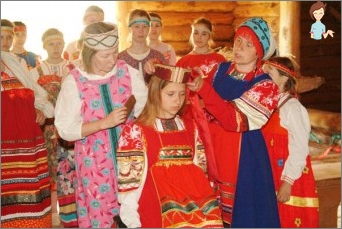 The definition of the functions of wedding officials has fully developed to the 16th century, and at the same time, established traditions in the dresses and other attributes appeared. But, the wedding itself became mandatory only in the 17th century, and the folk rite began to be subject to persecution from the clergy.

In the time of Tsar Alexey Mikhailovich, in 1649, even a special decree was issued, in which popular weddings. Having disadvantaged by baotogs, and the musical instruments used in the period of the festivities, broke and burned.

Unfortunately, many traditions of the Russian people are lost irretrievably. However, if you want to observe the ritual features when entering into legal marriage, you can find information about the nuances of weddings, for example, about the rite of walling, which rarely happens today.

How passed in Russia

The fate of the young was completely in the hands of parents. It was considered the norm that you need to tear off the girl from the parent house, as soon as she was fulfilled 12-13 years. At the same time, no one was interested in the desire of the future pair. Most often, the guy and the girl parents simply declared their decision.

The parents of the groom responsibly approached the choice of daughter-in-law, collecting the Family Council, in which the next relatives and the godfather of a young man participated. Not only the advantages of the bride itself were taken into account, but also her pedigree. Although, among the simple people, it was not necessary to choose a girl from a wealthy family. The well-being of the family focus of newlyweds were to seek independently. 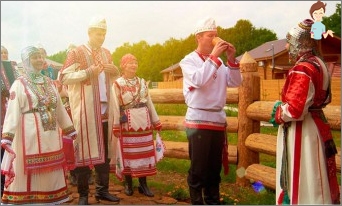 Choosing a bride, the matchmaker went to her house in «easy» Day of the week, Tuesday, Thursday, Saturday or Sunday, late in the evening or at night. Crossing the threshold, it was necessary to remove the header, cross on the icons and bow the owners. And then followed the ritual, well known today: you have a merchant, we have a merchant.

The parents of the bride should have been thanked for the honor of the woven and invite them to the Table to the table at which the treat was hastily.

However, he could get the fiance and refusal in the form of a streamlined phrase: our product has not yet slept. Sometimes the parents of the bride asked time to meditate. The right of votes remained at the girl itself. If the groom is not nice, she went to her room and changed an elegant dress on everyday, and then, returned to the table.

In the case of the walling of walling, they immediately moved to negotiations on the magnitude of the dowry, the size of the masonry allocated by the parents of the groom on wedding celebrations, about the estimated number of guests and gifts that relatives should exchange.

Modern wedding customs and traditional rites lost a lot, eliminating the mandatory stages of the matchmaker, conspiracy and loosen. Maybe gradually reviving interest in national culture will allow in all the magnificence to revive the original Russian wedding?