Decided to decorate the kitchen, but do not know where to start? To begin with, we advise you to acquire such a useful thing as tack. With it, you not only make the room, but also avoid burns

Everyone who loves and knows how to cook, know what unpleasant feelings can cause a burn. And this phenomenon is found quite often when cooking. Grabbed a hot patch of a frying pan or shed a small amount of oil on the finger – all this ends with burns. Well, of course, to protect yourself from the oil with the help of the tape you can hardly succeed, here you just need to be attentive. 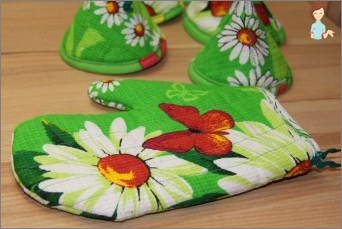 But here’s against burns obtained as a result of grabbing for hot surfaces, such a kitchen attribute will definitely save.

Capture can be bought almost in any economic store. But if you have a small amount of free time, then you can try to sew such a thing alone.

How to sew flasks

Before you begin directly to sewing flap tacks, let’s study the peculiar sewing features or patchwork.

The technique of such sewing can be divided into such categories:

But despite the fact that you choose what technique, the main thing is to correctly pick up the colors and carefully process the edges of each loskutka so that the cloth is not fringe.

Now proceed to the creation of patchwork tape. For its manufacture you will need a fabric of three colors, roller knife, threads in tissue to fabric, ruler and pins. Start a preparatory stage. Cut out of the fabric several flaps of the same size.

The standard size of patchwork flap – 10.85 cm, but considering that the tack of us will be small, we will reduce the size of each side of the square to 10 centimeters.

For this tape, we need to carve four squares from the fabric of the primary color, and two squares from the tissue of other colors. Cut items We will be with a roller knife. Remember that when using it, the angle of pressure must be equal to 90 degrees. Only in this case, the cut line will not be a curve.

After the squares are cut, you need to cut each of them into two equal triangles. Exactly of which we will do our sweat. It is necessary to decompose them according to the scheme that is indicated in the picture. Now she sew all triangles to one whole.

The result should look like the same as shown in the figure. This is only one half of our tape. Now you need to sew the second at the same principle.

Do not forget about the plug-in fabric, because the ordinary fabric will not be able to protect you from hot. You can use batting as such fabric. Now we put the tack as a sandwich: batting should be inside. Gently sew the edges. Also do not forget to attach a small looping to one of the corners. That’s ready for our kitchen tack.

Tacks do it yourself in the technique of quilting 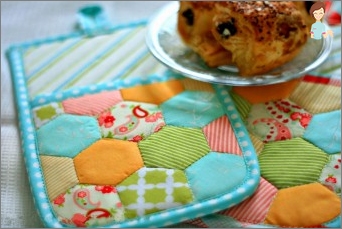 In order for the tack in such style to be beautiful you need a few pieces of multicolored fabric and a little sintecon. The first thing you need to do is cut 19 hexagons from paper. One side of each hexagon should be 2.5 centimeters.

You will also need to cut another hexagon, whose side will be 3.5 centimeters.

Large hexagon We will use as a template. Put it on the fabric from the wrong side and carefully cut down nineteen such elements. Now on each carved fabric element is worth putting from the wrong side a paper hexagon of a small size and to strip it with a cloth. Roughly speaking, you will have a more solid hexagon of fabric and paper.

After you have crossed all nineteen hexagons, starting to sew them. It is necessary to do this as follows, put two hexagons on top of each other face inside and gently sew them from one side. Continue to sew them among themselves in about the same way, and you will see that the result is a kind of flower.

After the whole composition is over, you need to thoroughly try your product to carefully and carefully pull all paper. Then you need to cut off a small piece of cloth of another color and sew the resulting flower in it. Do not forget that in the tack there should be three layers, one of which can be from batting or syntheps.

After the main part of our tape is ready, we need to elastic it. To do this, we cut a strip of seven or eight centimeters wide and gently sew it to the edge of our tape. At the end, do not forget to sew a loop.

Another option to create tightness is knitting. Here you do not have to scribble, and combine elements. The most important thing in this is to be able to knit at least the easiest pattern. That is why knitted tapes are an excellent option for beginners.

If the usual knitted tap does not cause you admiration, you can decorate a banal cloth with embroidery. To do this, you will need to take a finished tick and embroider all that your soul will wish. But remember that the pattern should not be too voluminous. Otherwise, take something hot, such a tack will be very inconvenient. 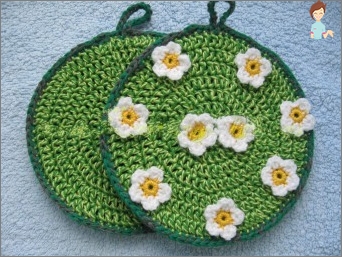 Children can be attracted to the process of creating such elements for the kitchen. Of course, you are not the most small ones in this matter, but if you already have more than ten years old, then you can still go sly. So you can take a child for a while something useful, and in the process of work you can become more close to him spiritually.

In addition, the tack for the kitchen is always original. If you want to hit guests with an interesting design, then you can raise a few taps in the kitchen as decor. It would be nice to also do in the same style of several kitchen towels.

So, today we have figured out how to sew patterned beginners. As you can see, there is nothing complicated. The main thing is not chasing very hard options from the first time. If you hold the needle for the second time in my life, then the easier it will be the pattern, the more chances that everything will turn out. And remember that in order to learn how to do something, you need to be patient. So good luck to you!