Materials and tools needed to create manual decorations. Bracelets do it yourself from beads. Homemade bracelets of satin ribbons and threads. Magic bracelets Shambala

Handmade, thanks to its filigree, expended labor and uniqueness, always appreciated, so the items made by hand, at all times cost more than the same, but manufactured in the factory. This statement concerns and decorations. Necklace, earrings, bracelets to make it completely simple, especially since the materials for them can be used the simplest – from buttons to polymer clay and threads. 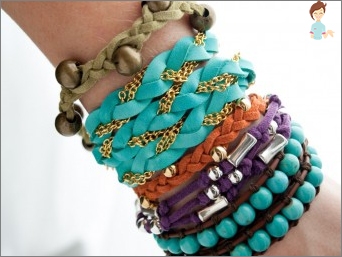 Bracelets with your own hands can weave from paracord, leather, beads, threads, paper and even plastic bottle and polymer clay, using beads and cords. Variants of mass. And in order to pamper yourself with handmade decoration, only instruments, material, and of course, own fantasy. Although you can use and already proven ideas. About how to make a bracelet with your own hands, using the most different materials, read below.

The choice of tools, first of all, depends on the type of material with which you sat down to work. Perhaps it will be just scissors and a needle. With a more complex material you have to take pliers, nippers, iron or hairdryer, acrylic paints, varnish, tassels. May have to use the oven for firing.

Help beginner master or regretting to try yourself in a new business shopping stores. A large assortment of wooden and plastic blanks, all kinds, beads, clasp and hooks will help make decorations, no inferior to the purchase.

Beaded bracelets made by hand

The simplest bracelet from beads, this is the so-called long, which is worn out on hand several times.

For its weaving, you will need such tools and materials:

Since the choice of material for decoration, you can fully show your fantasy, as it is not limited to anything. Want to choose flat or oval bispers, and you want to take hexagon. Well, in color and size, the question is not at all. Combine a variety of colors in color, texture and texture.

Before proceeding with weaving, decide on the length of the product and how many times it will turn around around your wrist. Recommended length 45 centimeters. Selecting the length, measure it on the cable or wire and cut off the nippers.

One end of the cable to attach the carbine tap. Curtain the end of the wire in the loop and wrap the remainder around the carbine. There should be no one millimeter from the fastener outside, because the wire is capable of making tightening on clothes and scratch your hand.

Now it’s about the banding beads and wire beads. Alternation can be symmetrical, several beads, one, two or more beads. Moreover, beads can be both the same and different.

You can also not adhere to symmetry. In the event that the resulting statement did not satisfy you, then before you pull the decoration, you can always remove beads and beads, and start first, until the result is completely satisfied.

Fixing the decoration depends on what type of fastener you chose. You can attach part of the fastener on the second end, fixing it as well as a carabiner, but you can make a loop from the cable. In the second case, on the round part of the rounds, the free end of the cable is wounds several times. Then, with the help of the taps, the residue of the cable is wrapped on the wire below the loop. The end also hides inside, so that nothing is superfluous from the bracelet. Ready!

Bracelets from satin ribbons with their own hands

Before you begin weaving the simplest product, remember several tips that make you the process of creating any braided jewelry:

Bracelets from threads Moulin do it yourself

They are also called friendship bracelets. They have many schemes, patterns and styles of weaving. For more familiar dating, let’s start with a master class for beginners. Having mastered it, you can wipe on more complex braided products.

To work, you will need:

Prepare material. To do this, we cut Moulin on segments of 60 centimeters. As a result, you will have six pairs of threads, that is, 12 threads. Fold them in mirror. For example, in the middle of two red, on both sides are two whites, then two blue and t.D.

Fastening material. You will not be able to weave until you fix the thread. To do this, tie a node and secure the ends of Moulin by Binder, a pin or a piece of scotch.

Weaving. Weave on the left side. Take the extreme left thread and tie her neighbor with a knot. At first, form a figure like a figure of four. Then extreme thread thread through the loop. Long tighten the nodules upstairs to the base of the weaving. Thus, you should get two nodes. The same extreme thread that moved to second place, make a loop and throw on the third. So, until you come to the middle.

Mirror weaving. Having reached the middle, make similar nodules from the right edge, starting with the extreme right thread. Releasing two nodes, come up to the middle.

Second row. Then return to extreme thread from the other end and spread the nodes from the same scheme, only we run it right to left until we do until the middle, and the extreme thread will not become average.

Fixation. Now both extreme threads were in the middle. Right Make two nodes on the left, granting the first row of weaving.

In the same way, we fly the following extreme threads, withdrawing them to the middle.

This weaving from the thread is called «Christmas tree» or «braid». This is the easiest option. Mixed them, you can diversify weaving with braid, beads, beads and other elements of the decor. In the same way, you can connect beads, hoops, belts and other decorations.

Shambala bracelet with her own hands

Shambala – Popular view of bracelets all over the world. They are attached to mystical and security properties that depend on the composition of the stones, which was used in the process of manufacture and mood.

Shambala bracelets are made and do it yourself before you master the master class purchase the following materials:

For those who know how to knit Macrame, the shambal will not be difficult, all others should be carefully read as follows:

As you can see, make a bracelet with your own hands from beads, beads, threads, satin ribbons are easy and exciting.