Pregnancy Calendar by Week - Pregnancy Week 1 - state sensations, symptoms in the mother. The development of the fetus at 1 week of pregnancy, photo

Let's talk about the first week - the beginning of a long wait, the way baby.

Counting the first week of being different, it all depends on what to take as a reference point.

Obstetric first week - Period, calculated from the first day beinglast menstrual period of the cycle, during which conception occurred. It was from this week counted period before delivery, which is usually 40 weeks.

The first week of conception - This is the third week of obstetrics.

The first week of the delay - This is the fifth obstetric week.

Signs of Pregnancy in 1st week

In fact, the first two weeks of obstetric held under a veil of secrecy. Because my mother does not know that her egg is fertilized. therefore signs of pregnancy in the first week noBecause the body just to prepare for it.

With regard to the signs in the first week ofconception or obstetric third week, it is as such, distinct pharmacological features not present. You may feel a little weakness, drowsiness, feeling of heaviness in the abdomen, a change of mood. This often occurs in women during PMS.

But the striking feature can be implantation bleeding. However, it is not all, and if it happens that he can not give due importance, it is often mistaken for the beginning of the month.

What happens in a woman's body in the first week?

The first week after conception is very important. It was during this time the fertilized cell goes from the ovary to the uterus and attached to the uterine wall.

This week is very high risk of miscarriage, becausethe female body does not always accept the foreign body is attached to the uterine wall, especially - when a woman has a good immune system. But our body is clever, it strongly contributes to pregnancy, so you may feel weakness, malaise, so the temperature can be raised.

The first week of the delay - it is the fifth obstetric week on which Symptoms can manifest themselves very clearly:

• Actually the main symptom itself will delay menstruation.
• Weakness and sleepiness,
• Morning sickness and hypersensitivity to food,
• Exacerbation of sense of smell,
• Unexpected food craving, possible interest in products that previously did not like,
• Pain of unknown origin and severity of the bottom,
• Breast enlargement, breast pain,
• Change in vaginal discharge,
• Positive result a pregnancy test.

Sensations from the expectant mother in the first week of obstetric

Feeling a woman after conception and in the early daysPregnancy can be very different, all very individually. Someone really does not feel the changes and do not even suspect that in a brand new life.

Other women show signs ofperceived as the usual signs before menstruation. After all, many familiar feeling when pulling in the abdomen or slightly increases breast, nipples ache, changeable mood.

Some expectant mothers from the very conception begins to feel the hormonal changes of the body.

Sensations and the responses of women in the forums:

A week before the anticipated start of menseshurt his chest and nipples, as usual before menstruation. He began to swell the stomach for 3 days prior to the day of the new X: I was a little nauseated from toothpaste when I brushed my teeth, skin around the lips darkened, halos nipple steel pupyrchatoy.

There were nagging pains in the right ovary, a littlewas sick, if not listened to him, probably would not even have noticed ... chest started to hurt after a delay, and it can not be called a pain, but rather weight, sensitive nipples, severe drowsiness.

No sensations! At all! Nothing! I therefore first not believe my eyes - all the "span" months as symptoms in themselves are, and then silence - well, I think, just by ... And here !!! And that's where the delay through the week - chest hurt badly, and start to grow, well, a little stormy.

And we as a statement filed to the registrar - so soonbecome pregnant. Prior to this year, lived, were not protected and personal. Small he felt it was time to arise. Our first-second week passed in the dark, walking at his own wedding, but then again - we have three!

And in my first weeks of pain in the chest andhypersensitivity, increased still sharp pressure drop! But, for the 3rd month it all goes away. But the feeling in the abdomen may still be pulling as during menstruation, if there is no discharge - this is normal.

Period 1 week obstetric means that conception has not occurred, and the future is only the fruit of mature follicles on the surface of the ovary, which is preparing for ovulation.

When the term of 1 week from conception, there is a movement of a fertilized cell of the fallopian tube to the uterus itself and getting used to the embryo in the uterine wall. During this time formed the placenta and umbilical cord.

Photos and videos on the first week of embryonic life 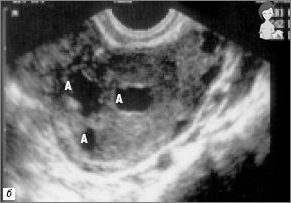 1 week ultrasound allows us to consider the dominant follicle, to assess endothelium and thickness to predict how it will develop the pregnancy. 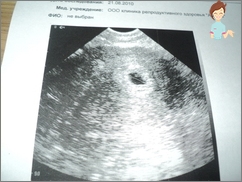 Video. The first week of conception

Video: What happens at the first week?

Recommendations and advice for mums

• It is very important for the health of your unborn baby will be your abstinence from alcohol and smoking, including passive smoking;

• Also, if you are taking certain medications, you should consult with your doctor and read the instructions carefully, is there a list of contraindications pregnancy;

• It is advisable to take a multivitamin complex for pregnant women, it contains folic acid, which is very needed future mother;

• If possible, avoid stress and take care of your mental state. After all, what happens to you affects the development of the child;

• Try to reduce the consumption of tea and coffee, especially if you use them normally in large quantities throughout the day.

Did you feel anything at first week? Share with us!