Why and when in fact there is cystitis? Types of cystitis, symptoms, complications. Comments from the forums. 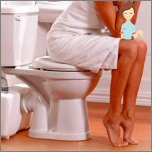 Many women once faced with an attackcystitis, which occurs suddenly and grabs you in the most unexpected moment. This acute attack can be triggered by various factors. How to recognize cystitis, relieve symptoms of cystitis, Treat it and prevent recurrence, we describe in this article.

Medical language "cystitis" - an inflammationBladder. What does this tell us? And, in fact, nothing concrete and understandable, but his symptoms will tell a lot. But more on that later. Cystitis occurs more frequently in women, because of our anatomical nature, our short urethra, compared to men, and therefore easier to get to the infection of the bladder.

Cystitis is divided into two types:

What are the symptoms of cystitis?

The attack of cystitis is difficult to confuse with anything else, its intensity on so palpable that the attack does not remain unnoticed.

So, symptoms of acute cystitis are:

Noticing the following symptoms,consult a physician immediately to determine the cause which provoked the attack. And, if possible, do not take extra medicine, because they can lubricate the disease pattern (eg, Monural).

What can serve as a reason for the attack of cystitis?

It has long been accepted that the attacks of cystitis are directly related to the common cold, and hypothermia, but this is only an intermediate, cause cystitis may serve as:

Reviews of women who experienced the problem of cystitis:

I have cystitis attacks began a half yearago. The first time I went to the bathroom, it was very painful, I almost with tears coming out of the toilet. there was blood in the urine, the toilet began to run literally every few minutes. The hospital did not have time that day, the next day there was an opportunity, escaped briefly, "But-shpoy" and a hot water bottle. At the hospital I was prescribed antibiotics to drink all week, and then "Furagin". They said, while I drink antibiotics, the pain can go, but do not stop to drink tablets, otherwise - go into a chronic cystitis. Naturally, by the nonsense I stopped taking them after the disappearance of pain ... Now, as soon as I should soak your feet in cold water or even just a little cold - start of pain ...

Thank God, I was faced with cystitis onlytime! That was 1.5 years ago because of my work. I just have not had the opportunity to be washed away, even during menstruation, so using a damp cloth. Then he was unwell, and a week later, when the cold has passed, I have no reason, no reason at all had an attack of cystitis. Just I went to the toilet and thought that "to write with boiling water" in the truest sense of the word! Call your gynecologist, explained the situation, she said, immediately start drinking "furazolidone" and the next morning I passed the tests, the diagnosis was confirmed. The treatment did not last long, and a half weeks on the force, but I end up finishing touches. Just go to the toilet I'm just afraid! ?? Pah-pah-pah, this ended my adventure, and I changed the job, it was the last straw, I have to work that day and did not let go, and I spent the whole evening in the toilet because urges were just continuous!

I am 23 years old and suffering from cystitis is already 4.5 years. Where and how only I was not treated, it became worse. Standard went to the hospital every month. No one could help. One of the doctors told me that cystitis, as a rule, do not treated. There is simply no immunity and all. Now it's been two months, never once have I had this terrible feeling of going to the toilet. I bought a new drug "Monurel" - is not advertising, just want to help people like me - tired of the disease. Believing that it is a good tool for the treatment. T. k. It is not a cure, and in the food supplement. And then somehow I ran to the store to buy tea and saw "Interview with fake flowers." Long could not understand why I have cystitis only begins at the weekend. Then he learned that the fake flowers - a folk remedy for cystitis, and many other ills. Now with fake flowers not leave. I brew them with tea and drink. So I found my salvation. Afternoon tea with linden flowers, the night supplement. And I am happy! ??

The risks associated with a bout of cystitis and immediate hospitalization!

Many women find that cystitis - it'sonly the usual malaise. Unpleasant, but not dangerous. But it is not so! Besides that cystitis can become chronic, it can "annoy" much worse:

Cystitis can be treated successfully and warn! The main thing to find during its beginning and take immediate control measures.

If you are faced with bouts of cystitis, or continue to fight against this disease, share their experience with us! For us it is important to know your opinion!