The molding from the salted dough does not leave indifferent neither children, nor adults, after all allows to mold figures more durable, than from plasticine. The material is much more pliable than clay

The molding of salted dough is a very extensiveA topic in which study is useful and interesting to deepen. Especially it concerns those who already dealt with such material, or is going to spend interesting time with their own child. 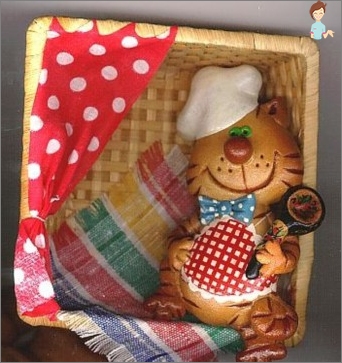 To mold from this material is entertaining and fun,Because each recipe for the preparation of raw materials allows you to make new and unexpected discoveries for yourself, and numerous options for handling the test make it possible to get entertaining figures and handicrafts.

The universal recipe for salted dough

To achieve the desired consistence will help an electric mixer:

The plasticity of the dough can be increased by one simple trick, namely: boil the jelly from one tablespoon of potato powder and two glasses of water. Transparent substance is used instead of water.

What would be the recipe for making the main consumableMaterial was not selected, the basis for modeling can be tinted with watercolors, gouache or food pigments. And the coloring can be done both during the kneading process and after the final product is ready.

For example, a real chocolate color can beObtain by using conventional cocoa. Also, various experiments with colors of natural origin are allowed: soot, ocher, carrot juice and the like. If you want to achieve a natural shade, then a figurine or a toy from the dough is simply baked in the oven.

Tinting an odd thing, you need to take into account the fact,That after drying the paint becomes somewhat duller than its primary variant. Return the brightness and saturation to it by lacquering. The varnish can be artistic or acrylic, although it is quite acceptable to use a construction coating designed for processing wood, parquet and so on.

The methods and details of making a salt-based test

By the long-term practice of using such material for needlework, a whole list of things that are categorically inapplicable to the salt test has been revealed.

How to fix possible defects?

Even experienced craftsmen need to correct some errors that arise when working with a salt test.

Let's consider the most widespread of them and ways of their elimination:

In which cases can the dough become swollen or crack?

This can happen for several reasons. Firstly, flour can be wrongly chosen. So, the required level of strength ensures the presence of rye flour in the mass, even in the amount of 1 glass.

Glue PVA or 50 g potato powder also giveplastic. Secondly, you could make a mistake with the drying regime. If the cracks appeared after painting, then, most likely, you do not dry the hand-made. Do not rush and cover the product with paints and varnishes.

How to dry the dough correctly?

If you have time, then you can dry figurines better on natural conditions. But this process can take a week or more, which completely depends on the level of humidity in the ambient air.

Therefore, almost all needlewomen, no matter what recipe for salty dough for manual modeling they used, bake their creations in the oven, while observing simple rules:

The period of full drying completely dependsFrom the thickness of the product and the recipe by which the original mass was made. So, for example, if oil or cream was used, the drying process will be even longer.

So that you would like to make something else out of saltedTest and did not have to deal with the problem of its cracking, dry the workpiece in a few desks. So, for example, it can be in a slightly opened oven for an hour and a half, then the device is switched off for 2-3 hours or even at night, after which the entire procedure is repeated.

Regardless, we make a lemon from a salted dough withFollowed by natural drying or drying in the oven, the article must be turned every hour. Also take into account the fact that fresh mass and the one that has been lying in the refrigerator for several days will differ in shade.

If you want to achieve interesting textures and patterns,Use special stamps, although you can use the usual toothpicks, embossed buttons, nozzles for a confectionery syringe and so on.