How to make a photo album with your own hands? You can buy all the necessary elements for its production in the shop, but you can do everything yourself, from binding

Today more than ever in the fashion of handicrafts made by themselves, the so-called "handmade". Demand for them is constantly growing and I must say that such things are quite expensive. Depersonalized postcards and photo albums are a thing of the past, and they are replaced by original, unique products. Such products include "Scrapbook"Or as it is called in the west - scrapbooking.

This idea makes it possible to implement a book of children's quotations, memorable drawings and clippings, you can write your own chronicle. And how to make a photo album with your own hands? 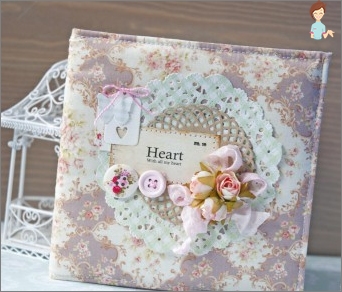 On sale you can find ready-made scrap-albums, but those who want to create their masterpiece from beginning to end, do not seek to ease themselves a task.

Armed with special blanks fromChipboard, acrylic and dyed cardboard, you can start creating a diary, photo album or invitation, or you can make a simple binding, for example, 12 sheets.

How to make a photo album by stages:

Looking for a way to make a scrapbooking photo album,It is enough to look around you. If you are constrained in funds, you do not need to spend money on special decorations presented in the specialized store window.

To do this, you can use any improvised means that can be found in the house - tapes, beads, shells, pebbles, stickers, buttons, cut-outs from magazines, etc.

If desired, you can put the production of suchThings on the flow and receive from this income, because how to make an original wedding photo album, a collection of photos of your baby or even just a beautiful postcard by the forces not all - it's a whole art, but he can always learn.

There will be no lights out for those wishing to buy such a thing, because hand-made is extremely in demand today.

How to make an electronic photo album model

Working with the soul, and using all the possibilities of your imagination, you can create an album that friends and relatives will be jealous of and ask you to make them the same.