Almost all children love to make something with their own hands. If plasticine and colored paper are already boring, try making crafts from vegetables with your own hands in conjunction with children

If you do not know what to do with your childLong winter evenings, to at least distract him from watching cartoons and games on the tablet, try a little pomasterit with his own hands, for example, crafts from vegetables, fruits or natural materials. 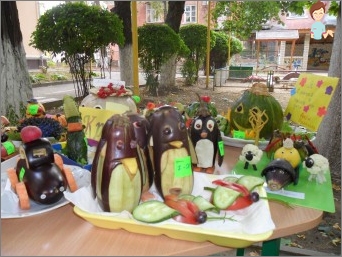 This lesson will not only bring you closer together, but it will be extremely useful, because it trains the fine motor skills of the hands, develops imaginative thinking and imagination, and also forms an artistic taste.

In addition, crafts from such a naturalMaterial like vegetables are completely harmless to the health of the child and very economical, because you do not have to spend money for such a lesson - zucchini, carrots, eggplant and potatoes are always found in any home.

Eggplant is the ideal material forChildren's handicrafts due to their softness, compliance and ease of processing. However, he also has a minus - it very quickly deteriorates, withers and loses its original appearance.

To create a pretty dachshund, you will need:

The first smooth eggplant with a long tail untilPut it aside and take up the second. From it we cut off a piece in length of 4 sm from that party where a tail is a muzzle of a dog. Dry part of the tail must be carefully trimmed with scissors, so that the tip of the dog can turn out. From the remaining already cut eggplant on the other hand, also cut off 4 cm and divide along into 4 parts, from above we peel the skin - these will be the legs of our dachshund.

Next, from the skins of eggplant with scissorsNeed to cut the ears and withers dachshunds, attach them with toothpicks to the head of the dog, from the peas do the eyes. It is necessary to try to make the craft so that the pulp could not be seen at all. Now you can start assembling the dachshund: the head is attached to the trunk with several toothpicks, with their own pins attached. That's all, the dachshund is ready.

If you doubt your own abilities, you can find on the Internet a master class for making such crafts and learn a little.

Few people like real rats and are happy to meet them in real life. But this rat from a radish will like even the most timid.

In order for you to get a rat you need to get:

Radish needs to be thoroughly cleaned beforehand andDry, remove all the leaves, except one, which will play the role of the tail. Further, it is necessary to cut off all the roots, except those that are located on the site of the mustache. Now you need to cut off the front part of the radish and attach radish to it with toothpicks.

Right and left, a little above the nose-radishes doTwo eyes from the halves of the olive. You can also use the remnants of radishes for our rat's eyebrows. It remains only to make the ears from the leaves of the lettuce. You need to make neat slots on the sides of the rat's head and insert the leaves of the salad into them.

A very simple work of natural material is a train of courgettes. To do this, you need 4 small young zucchini, one carrot, a slice of cheese and toothpicks.

Two squash turn into wonderful cars,The tip of a carrot 2 cm long - in a coupler for cars. The two remaining zucchini are cut into rings and become wheels in quantity of 8 pieces and the same number of circles must be cut from carrots.

Now it is necessary to collect "Wheels"Zucchini and carrots and attach to the wagons with the help of toothpicks carrots outside, and from the cheese cut into small squares make windows for the wagons.

The charm of crafts with your own hands from vegetables, exceptA pleasant pastime with the family, is also the fact that after all they are admired, the figures can easily be eaten. Not all babies like to eat raw vegetables, but try to eat cheerful crafts made of vegetables for children, few will refuse, for example, a cheerful cucumber crocodile.

To create a crocodile you will need: 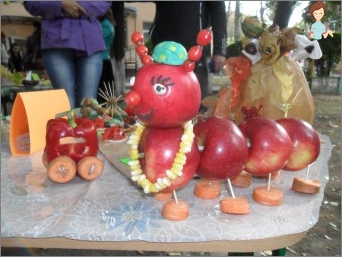 Curve the cucumber until touched. We start work with another cucumber: cut 2 cm from one side where the tail is fastened - this will be the occipital part of the head of our crocodile. The remaining part is cut along half-and-half: one part will go to the tail, the other will become the head with a jaw. Teeth crocodile must be cut very carefully, so as not to break the crust of cucumber. The legs of the crocodile need to make their tips of the third cucumber.

Now you can proceed with the assembly. First you need to attach the legs and tail to the body with toothpicks. Then put together two parts of the head and attach them to the top of the body. Now it remains only to make the crocodile eyes and you can please the children with an amusing and useful dish.

Especially for the young children are crafts made of fruits.

In order to make a tasty and beautiful crafts from apples in the shape of a caterpillar you will need:

Five apples must be connected in this way,To get the body of the caterpillar, you need to connect them with a toothpick. From the carrot cut off the tip of a length of 3-5 cm and attach it as a tail to the caterpillar, the remaining carrots are cut into ten identical rings and attached two to each apple - turned the legs. Now put our caterpillar on the legs.

Green peas string on the thread, andBeautiful beads for the caterpillar are obtained and we put them on the first apple, from above we cover the sixth apple with the buttock up and fix it with toothpicks. We place black pea in place of the eye, radish - in place of the spout. Black olives thread on 4 to 2 toothpicks and make horns.

The easiest and favorite for children crafts is a pumpkin carriage, because it is very easy. All you need is a thin and sharp knife, pumpkin, zucchini and toothpicks.

With a pumpkin neatly cut "Bonnet", The pulp is selected with a spoon. Next, with a knife in the pumpkin, the windows and the door are cut through. From the zucchini carved wheels and attached toothpicks. Now you need to give the pumpkin a little dry, and you can put a candle inside and light it. The whole lamp is ready. 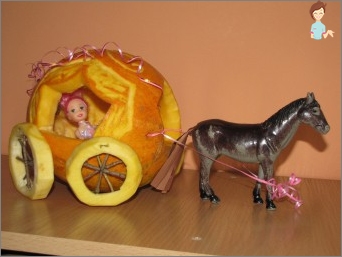 Whatever you make from fruits and vegetablesWould think of making with their children, for themselves or as a craft for a garden of vegetables, one must always remember the rules of safety. All vegetables and fruits should be washed, because in the process of work, and after its completion, the child will necessarily want to taste his masterpiece.

All stabbing and cutting objects: knives, scissors, needles and toothpicks should be in your field of vision, and after the work is washed and laid out in their places.

If you have difficulties with making thatOr any other craft described above, on the Internet you can always find any master classes of crafts from fruits and vegetables detailed description and step-by-step photos.