The question of how to swaddle a newborn, faces the young parents not only from a technical point of view. They also wonder whether it is necessary to swaddle a baby

Immediately after the birth of the baby, or even before this glorious event, the modern young parents face a burning question: Whether it is necessary to swaddle the newborn? 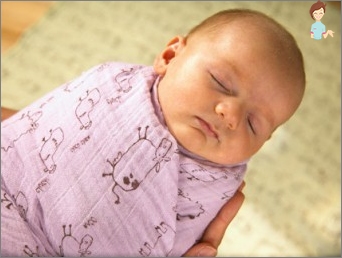 Young great-grandmothers insist on the use of diapers on a mandatory basis - 40 years ago, a newborn baby without diapers and it was impossible to imagine. How can I not swaddle? There will be crooked legs!

Young grandmothers are against swaddlingcategorically. Twenty years ago with little came the fashion to put on kids from the first day after birth only appeared on sale overalls-little men, and they did not swaddle. What to do and whom to listen to?

What do pediatricians talk about swaddling?

Modern pediatrics believes that the tightSwaddling is harmful, it can slow the development of the newborn, it causes weakening of the muscles. The kid in the tight cocoon is uncomfortable - he takes an unnatural position for him, it constantly worries him.

But pediatricians explain that the last days beforeThe baby was in a closed space - it was pressed against the walls of the uterus - therefore, the restriction of movements is familiar to him. Hence, swaddling will help him to comfortably experience "transition"Period. He will feel himself in a changed environment more protected.

Opinion of the newborn

Surprisingly, in this matter the opinion can express itself and the baby. And quite loud.

Each child from the very birth has its own character and individual preferences.

Some newborns can not simply sleep without diapers: they interfere with their own hands, wake themselves, free movement of limbs cause them inconvenience.

And there are children who, from the day after birth, calmly fall asleep with their arms raised, and the placement in diapers causes a violent protest.

It turns out that when using diapers you need "Consult"With the baby.

So swaddling a newborn baby is necessary or not?

In the first days after the appearance of the baby in the lightIt is desirable to swaddle it, but it should not be fixed at this time. Then it is worth trying to release the baby handles, watch how he will react to the free posture, and already focusing on his behavior, make a decision.

It should be said that many young parentsThey refuse from diapers, completely without thinking about the comfort of the baby. They just do not know how to do it, and they do not want to learn. It's much easier to cope with sliders.

Algorithm for combining baby and diaper

Learn how to swaddle the newborn correctly, after all the preparatory stages have been passed:

A reusable diaper is a hygroscopic piece of cloth, most often 80x80 cm in size. Such gauze tools are sewn.

Before wrapping the baby in it, it is bent obliquely, like a handkerchief. An obtuse angle lies between the legs of the baby, sharp corners wrap around the calf.

In the scheme of changing the newborn (with or without handles), it is easy to understand.

The child is wrapped with handles 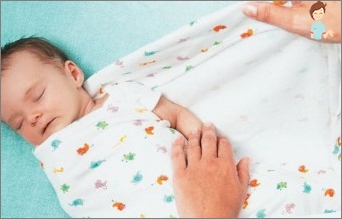 Laying out the diaper on the changing table, it is necessary to take into account: the upper edge of it should be located at the level of the neck, so it should not be placed near the edge.

The newborn is stacked, the pens are placedParallel to the body, and the diaper slightly obliquely captures them. The edge of the canvas is fixed under the back of the baby. There should not be any folds. The lower edge stretches like the tail of a mermaid, rises to the cocoon, stretches, wraps around the body of the baby's swaddled body and is fixed.

The ends meet on each other and are bent. Some parents fix the construction with an English pin. But even an English safety pin can be unfastened.

It is clear what will happen if this happens.

This method is used in the following cases:

Wrap the baby envelope so:

Girls are supposed to purchase pink ribbons of all shades and white, boys - blue, blue, red.

The angle is bent - the face is open. At any time, the face can be covered by changing the position of the diaper or blanket.

How can you swaddle a newborn in the heat?

In the heat of the baby wrapped only in a thin diaper, and neglected multi-layered outfit - that is, under the diaper do not wear a warm underpant.

It is best to wrap the diaper around the legs, release the handles and keep the body from the armpits to the neck open.

Swaddling is done in the usual way. But the "tail" of the diaper is tucked twice before fastening: if it is bent in the straightened state, a double cocoon will be obtained, and the baby will be hot.

If the decision is made: In the heat of the newborn leave the hands free, the nails must be carefully trimmed in advance or put on the handles of the gloves. Children do not control their movements for up to six months and can scratch themselves.

If the child is taken to the street, then on the head -Despite swaddling an envelope - put on a hat. In the first days, it is desirable to protect the head from external influences with a cap or kerchief even at home conditions - the child needs adaptation to changing the temperature regime. 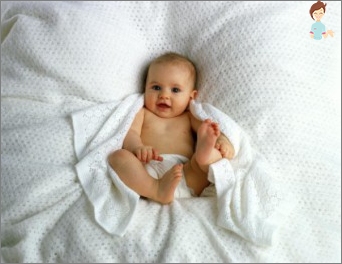 All clothes of babies, including diapers and reusable diapers, are washed with baby powder or baby soap, ironed on 2 sides before use.

Despite the numerous appeals of advertisers,Conditioners and bleaches to use undesirable - they can give a push to an allergic reaction. Even if the clothes are carefully rinsed, the smell of "freshness" remains, and it is not known how the baby's respiratory system can react to it.

When the baby turns 2 months old, ironing can already be neglected.

It is not difficult to understand how correctly to swaddle a newborn baby. A little patience, and the "packaging" of the baby will not present any difficulty.